We train all our customers in the safe use of scooters.

Which is the right scooter for you?

Take the scooter test to find ou which scooter would be suit you.

Book a test drive and our team of experts will bring a range of scooters to you!

This is a question often asked. However, the real question is more …. “Are scooters safe for me, or my relative / friend?” It’s an issue about the user safety and whether a scooter is a suitable form of transport for that particular user.

The answer to the question is undoubtedly “Yes”. But in the end, it is up to the user themself to decide if the scooter is a safe form of transport for their requirements.

If you ask another question: “Are scooters a safer form of transport than cars, or even walking?”, then the answer is an unequivical “YES”! Research done by Scooters Australia and presented to the Australian Consumer and Competition Commission (ACCC), points to scooters being around 3 times as safe as driving a car, being a passenger in a car, or walking on the footpath. This research can be viewed by clicking HERE

So, if you are considering swapping your car for a scooter for those local trips, you are reducing your risk of accident by around two thirds! ….. 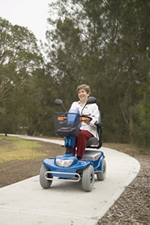 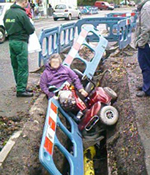 Safety zone in the middle of the road

Impossible ramp and extremely
narrow path. Users are forced
to travel on the road in
this situation

Why Do Accidents Happen?

As you can see below (“ACCC Confirms Scooter Safety”), from the research that has been done, scooters are a very safe way to travel for local trips. However, when accidents do happen, there are four main causes:

1. Little or No Training

If you have not driven a scooter before, some basic training is in order, even if you have driven a car. Scooters are far easier to drive than a car, but there are still some pitfalls in driving safely. There are plenty of tips that can help you drive safely.

When you purchase from a Scooters Australia store we give you a full training course backed by a certificate on successful completion (see right).

Make sure that when you purchase a scooter, safety training is provided. If you have already purchased a scooter but feel you need some training, we can provide it at a reasonable cost. And ensure that you read the Owner’s Manual thoroughly.

Scooters have been around for more than 20 years and all levels of government have not kept up with this new trend in local travel. So footpaths and road / footpath ramps are still in a very poor state of affairs in many areas and sometimes contribute to accidents, especially if the user is forced on to the road.

Some councils are making the effort, and others are not. So what can you do about it?

The first thing you can do is to tell the council that you want to travel on a certain route and that the paths and ramps are not suitable. They are obliged to do something about a bad situation or face the possibility of being accused of discrimination.

Secondly, you can write to your local member, both state and federal, and point out the poor state of the infrastructure. If they are serious about the road toll, about safety, and about global warming, they should make an effort to help.

Not all mobility scooters are created equal, despite the appearance. It’s what’s under the “bonnet” that really counts!

Mobility scooters come under the category of a medical device and must therefore be subject to the Therapeutic Goods Administration requirements. Some less scrupulous importers are bypassing their obligations to have their scooters comply with these requirements.

So make sure your scooter seller is selling mobility scooters that are registered with the TGA.

And make sure that when you write to your local member, you urge them to ensure the TGA is doing their job and culling out those non compliant scooters from the market.

If you fail to have your scooter or powerchair serviced regularly (at least every 12 months) you risk the scooter developing problems that may lead to dangerous situations, and the inevitable costs involved. You may also void your warranty.

CLICK HERE to read a very sobering story about one person who failed to read the Owner’s Manual and failed to have the scooter serviced at regular intervals.

Scooters Australia presents safety paper to ACCC meeting.
The ACCC called a meeting in September 2009 with various organisations, government departments and industry to discuss what could be done to increase the safety of mobility scooters. Scooters Australia was asked to provide an industry response (CLICK HERE to access the paper we presented to the meeting).

At the meeting, Dr Clare Bradley from Flinders University delivered a research paper in which she put forward a figure of approximately 35 deaths that may have been caused by electric scooter accidents between 2001 and 2009. This represents less than one death per state per year and is a far cry from the 200 odd deaths caused by road accidents in the 70+ age group each and every year.

New ACCC Survey: Surprising results
The ACCC, NRMA, Choice magazine and Flinders University released a survey on mobility scooter use and safety with some surprising results. But what was not surprising was their conclusion regarding safety – that scooters are a relatively safe way to travel, especially to local destinations, and that the areas where most improvement can occur are in user training and in better infrastructure.

Scooters Australia pioneered the area of training, was instrumental in helping the NRMA, Occupational Therapists, and local governments in implementing training programs, and always train new users in the safe use of their scooter as part of the purchase process (see above “Why scooter accidents happen”).

NSW StaySafe Committee submission
The NSW Government conducted an enquiry into mobility scooter safety in 2013 and Scooters Australia made a submission to the enquiry which has been published on the NSW Government website. You can read it HERE.

National Party Senator Williams makes exaggerated claims about speed.
Nationals senator John Williams claimed on the ABC that scooters could travel up to 30 kph and wants the speed limited to 6 kph. Read more on our blog page and make a comment.

Here are a few tips on safe scooter driving: Most road organisations offer advice on safe mobility scooter driving and you can access this through their web sites listed in the “Links” page. COTA (ACT) also have a couple of publications that are useful and a very good DVD on scooter safety. In NSW, NRMA Motoring & Services offers free education programs older drivers and pedestrians and those interested in learning more about Scooters. For more information on how to book a program for your community group, go to www.mynrma.com.au/olderdrivers

Book a test drive by submitting the form below and one of our friendly team will get in touch to confirm the details.